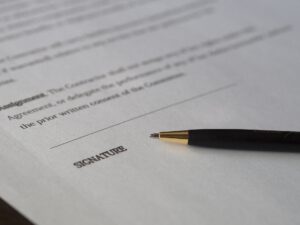 At first glance, the terms of the contract seem straightforward. The clauses therein make perfect sense, and, because you want to do the deal, you do not question their inclusion in the agreement. While the underlying agreement or contract may seem straightforward, you need to do a thorough evaluation to make sure you aren’t waiving your legal rights by signing the contract.

Because contract law “charges” you with what you signed whether you read it or not, we suggest reviewing the contract with an understanding of the rights you are waiving and the potential consequence forfeiting those rights can cause in the event of a legal dispute. Once waived, you can not ask the court to reinstate those rights unless it is a clear violation of your right to due process.

For example, an underlying agreement can change the method in which you receive notice of an impending lawsuit filed against you, shorten your time to appear in a legal case, allow the creditor to rush to judgment against you, and more.

Such is the case with our client who is a borrower and now a named party in litigation with a merchant cash lender. Due to non-payment, our client – a corporation and its chief executive officer, as guarantor – were named in a lawsuit.

New York Civil Practice Law and Rules (CPLR) specifies how parties to a lawsuit must be given notice of the impending action. The manner in which the pleadings are to be served is detailed and set forth to ensure parties have adequate notice of the lawsuit.

How Signing a Contract Can Lead to Waiving Your Rights

In our client’s case, rather than require service of the pleadings as required by New York law, the underlying contract included a provision wherein our client agreed notice of any lawsuit or legal action could be made by regular mail. This clause in the contract gave the creditor permission not to comply with the New York statute. The contract also included a provision that shortened the period of time to answer the lawsuit. The time in which our client had to answer was “reasonable to afford them an opportunity to defend.” The notice was sent by regular mail to our client and eight days later, the creditor submitted a judgment to the court for entry.

Had our client not agreed to service by mail, service would have to be done in person or by agents with an additional mailing of the summons usually required depending upon the type of service made. The client then would have had 30 days from the date of service before they could be considered in “default” and a judgment submitted for consideration.

New York changed the law as part of a major crackdown on the merchant cash advance industry just a few years ago. The change in law prohibited the use of confessions of judgment for all debtors residing outside of New York State. We believe the merchant included these clauses in the contract to obtain the equivalent of a judgment by confession by manipulating the borrower to sign the contract and waive some of their legal rights.

We will now make a motion to the court to vacate the judgment, based on the fact our clients did not have a reasonable opportunity to defend the case. A review of the contract will reveal it is truly one-sided, drafted in favor of the merchant, and unconscionable. The terms therein should not be enforceable against the borrower.

We expect to win the motion and have the judgment vacated, giving our client an opportunity to defend the lawsuit.

Have questions about defending a debt collection case? Let us help. Contact Frank, Frank, Goldstein and Nager for a consultation.