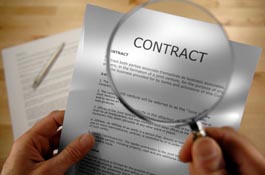 A good contract is comprehensive. When drafting a contract, everything discussed and agreed upon should be included in the physical document. Do not rely on contract negotiations, comments, conversations, or notes taken during the contract’s preparation or signing. If part of your agreement isn’t featured within the contract, even if it was agreed upon verbally or in the context of an email, it may not hold up in court because of NewYork’s Parol Evidence Rule.

Should litigation occur, courts will generally look to “the four corners” of the document. This is known as the parol evidence rule. This rule excludes outside writings, those that are not part of the document and may contradict what is stated, from being presented in court.

While communications occurring outside of the contract are typically not considered in court, some exceptions do apply. The courts will allow “outside” evidence if:

Make sure the terms of your contract are clear and provide for relief in the event of a fee dispute. Do not rely on a promise that is not included in the four corners of the document as New York’s Law will generally not allow it because of the Parol Evidence Rule.

If you have questions about the enforceability of a contract, contact FFGN.  We have the experience that pays…….